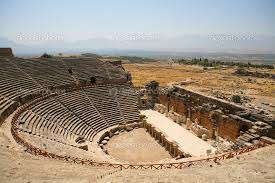 proscenium:  the metaphorical vertical plane of space in a theatre, usually surrounded on the top and sides by a physical proscenium arch (whether or not truly “arched”) and on the bottom by the stage floor itself, which serves as the frame into which the audience observes from a more or less unified angle the events taking place upon the stage during a theatrical performance. The concept of the fourth wall of the theatre stage space that faces the audience is essentially the same.

Stage act usually accompanied by music such as opera consisting of several different pieces of music.

A long drama that seems without end.

Finale – last section of musical composition or closing part of a scene in a public performance – conclusion.

Small scene used as background behind an opening such as a door or window in a larger stage scene.

Trapdoor in stage from which cues can be given to actors.

Intermezzo: A light dramatic musical or other performance between the acts of a play; A short connecting instrumental movement in an opera or other musical work.

A. To recite, declaim. B. To act, perform, to feign ingenuity, to play act.

Byplay: secondary or subsidiary action or involvement in a play or film.