quagga (Equus quagga quagga):  was a subspecies of plains zebra that lived in South Africa until becoming extinct late in the 19th century. It was long thought to be a distinct species, but early genetic studies have supported it being a subspecies of plains zebra. A more recent study suggested that it was merely the southernmost cline or ecotype of the species. The name was derived from its call, which sounded like “kwa-ha-ha”. 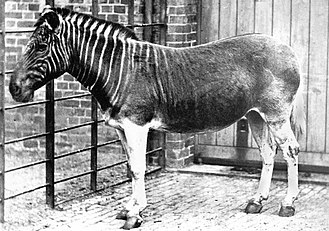